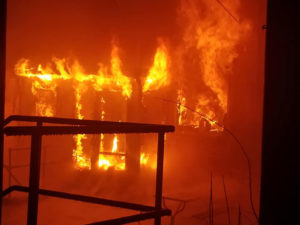 Firefighters were called to the city hall about 7:40 p.m. and when they arrived, flames were already shooting through the roof. It took about 35 minutes to get the exterior fire extinguished so firefighters could move inside.

Keokuk City Administrator Cole O’Donnell says no one was hurt but the building suffered heavy damage. “It was a catastrophic fire,” O’Donnell says. “It took out the first floor of city hall and there’s extensive smoke, fire and water damage to the entire building.”

Temporary city offices are being set up on the third floor of the nearby Pilot Grove Savings Bank on Main Street. “They graciously have offered that up to let us begin getting set up there,” O’Donnell says. “We’ll probably have to work out a short-term lease because we’re not moving back into this building anytime soon.”

Thursday night’s city council meeting will be held as scheduled but in a new location, the school board chambers. The cause of the fire is under investigation.