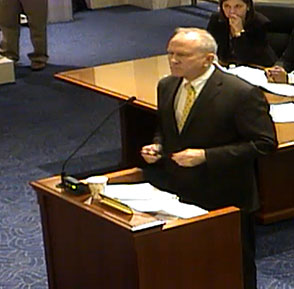 The Iowa Supreme Court heard oral arguments Tuesday in an open records case involving the shooting by a Cedar Rapids police officer that left a man paralyzed during a traffic stop in 2016.

A Linn County District Court judge ruled that the city must turn over police investigative reports in the civil lawsuit against officer Lucas Jones in the shooting of Jermine Mitchell. The city’s attorney, Bill Stone, says the release of these records are different from others as they are confidential and the city wants them kept from public view.

“We are willing to produce all the requested records to the plaintiffs as long as they are retained as confidential in the scope of this litigation — and that’s the key difference,” Stone says. Dashcam video showing the officer hanging onto Jones’ truck as he sped away and the officer eventually shooting Jones was released by the city.

Stone says they offered an agreement to produce the requested records. “We discussed with the trial court when it came time for discovery and look at the production of possibly confidential records, we came up with this mutual protective order,” Stone says. “And it doesn’t merely protect the records from the city and officer Jones — it would protect the plaintiff’s medical records and other confidential information.” 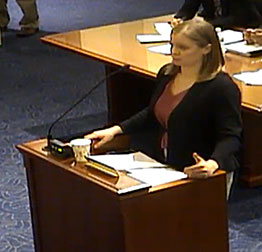 A grand jury declined to bring charges against officer Jones in the shooting, while the civil lawsuit filed by Mitchell and his wife says Jones acted recklessly in the shooting.  Mitchell’s attorney, Laura Schultes argued the city is trying to get around the law requiring them to produce the records. “We filed this case in civil litigation we served our discovery request, and defendants filed a motion for a sweeping protective order to keep a broad range of documents — some potentially covered by twenty-two-point-seven, some potentially not — hidden from the public,” Schultes says.

Schultes says the district court ruling was right in requiring the city to produce the records. “The thrust of our discovery rules, the thrust underlying the high standards fore the grant of the protective order, and the thrust of the open records act, is in favor of the disclosure,” according the Schultes. She says the city is trying to control the information to make it favorable to them. “The defense in their briefs raises the issue of the threat of this information getting out to the public. At this point in time the information that is out in the public is that which the defendant’s have put out there. The information that they’ve decided that the public should know,” Schulte says. “And our interest here is in getting all the information out to the public — in part through the trial process.”

Justice Brent Appel told Stone the concern is that is a case of open government versus “selective open government,” where the city releases only the information that is favorable to it. “Your view would be that the custodian could release selectively parts of the file and withhold other parts,” Appel says. “That’s not my position. We are absolutely claiming we were not going to release any peace officer’s reports, unless we were ordered under a protective order, unless this court orders us to do it otherwise,” Jones replied.

The Supreme Court will rule on the case at a later date.