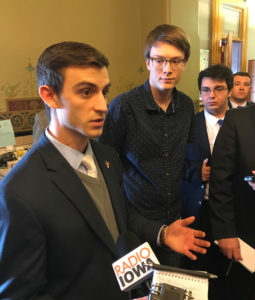 About a dozen students were at the state capitol today to show support for a bill to address free speech issues at the public universities and community colleges in Iowa.

“Throughout my four years at the college I’ve had bosses, co-workers, professors and even friends try to censor how people speak and think, so I think that this bill is pretty important,” said Olivia Fox, a senior at Iowa State University.

The bill under discussion in the Senate was drafted after the student group “Business Leaders in Christ” was kicked off the University of Iowa campus for barring an openly-gay member from its leadership.

“We expected there to be a bias when we went to a public university…and we are o.k. with that,” said Iowa State University junior Jacob Minock, the president of ISU College Republicans, “but we are not o.k. with being silenced.”

Iowa State University sophomore Trevor Kems told legislators some groups and individuals have not been allowed to speak freely on the campuses.

“I believe, personally, that some of the violations of our free speech have affected the conservative groups on campus more than some other groups,” Hems said, “and I would like to remedy that.”

Representatives from a wide variety of groups expressed support for most of the proposal, but some raised concerns a section of the bill would let school-sanctioned student groups discriminate against members. The bill cleared a subcommittee today, but key Republican senators say they’ll consider changes to the legislation.