You are here: Home / News / Winter weather not letting up 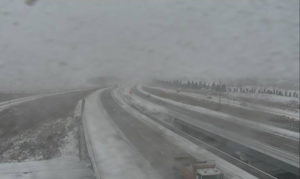 DOT camera view on I-35 near Ankeny.

More wicked weather is snarling traffic and freezing fingers across much of Iowa.

The entire state is under a Winter Weather Advisory, an Ice Storm Warning is in effect for southeast Iowa, while a Blizzard Warning is posted for northwest and north-central Iowa. Meteorologist Mindy Beerends, at the National Weather Service in Johnston, says only a few inches of snow are predicted but the winds will be whipping up whatever falls, potentially causing white-out conditions.

“Winds will be strong enough that we are expected to see blizzard conditions, starting late morning in northwestern Iowa and into the afternoon in north-central Iowa,” Beerends says. “That looks to continue through the evening hours with winds gusting 40 to 45-miles an hour at times.”

Another round of frigid, arctic air will arrive in Iowa shortly.”Tonight, we could see wind chills dipping to between 30-below and 40-below in parts of far northern Iowa and then between 20-below and 30-below for portions of central and southern Iowa,” Beerends says. “Those bitter cold wind chills will continue tonight into tomorrow morning and the temperatures will drop again Friday night, looking at lows around ten-below to teens-below in far northern Iowa.”

The long-range forecast calls for more chances for snowfall on Sunday and again on Monday night and into Tuesday.