You are here: Home / News / Cory Booker presents himself as uniter, not divider in Iowa campaign debut 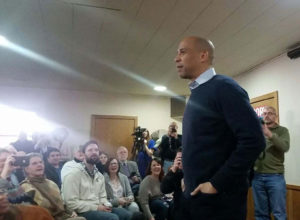 About 100 people gathered in the basement of a Mason City church this morning for New Jersey Senator Cory Booker’s presidential campaign kick-off in Iowa.

“I’m standing here in Iowa today running for president of the United States because I worry that in this nation right now there are people who are losing faith in us, in our ability to solve problems, deal with persistent injustices,” Booker said. “People are feeling left out and left behind.”

“They’re our neighbors. They’re our friends. We may disagree with them, but we’ve got to find common ground. I want to win the White House back, but it’s not to beat Republicans. It’s to unite Americans,” Booker said.

“We have to make sure in this election we define ourselves and you don’t define yourself by bringing out the worst of who you are. You can’t campaign wrong and then think you are going to govern right.”

The first question from the crowd was about the so-called Green New Deal. Booker says this is a nation that’s done impossible things before and it’s going to take bold action to respond to climate change. That includes significant investment in “green” energy technology.