You are here: Home / News / Iowa’s governor open to ban on smart phone use while driving 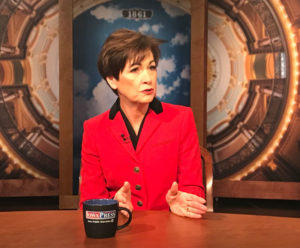 Governor Kim Reynolds says motorists using a smart phone while they drive are “extremely dangerous” and she’s open to considering legislation to crack down on the behavior.

“We want to do everything we can to reduce the number of road fatalities and that seems like a practical thing to do,” Reynolds says.

Current Iowa law bans texting while driving, something Reynolds voted for when she was a member of the Iowa Senate. A Senate subcommittee this week advanced a bill that would prohibit drivers from even using cell phones unless the device is in “hands-free” mode.

“That seems like not an unreasonable thing to expect,” Reynolds says.

The bill would raise the fine to $100 for drivers caught using a cell phone while behind the wheel.

“That’s something that I would definitely be willing to take a look at. As I always say, I’d like to see it in its final form before I weigh in,” Reynolds says. “But anybody that drives down I-235 or the Interstates, we see people on their phones and it’s extremely dangerous.”

If the bill under consideration in the senate becomes law, drivers in a serious wreck while on their cell phone would face stiff fines and could have their driver’s licenses suspended. Reynolds made her comments this morning during taping of the “Iowa Press” program which airs tonight on Iowa Public Television.