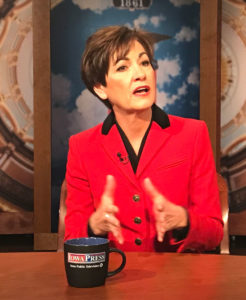 Governor Kim Reynolds has used a Utah law as the template for her proposal to let women get birth control directly from a pharmacist rather than having to periodically get a doctor’s prescription. Reynolds said the bill outlining the details may be released as soon as today.

“There is an age limit. I think you have to be 18 or older,” Reynolds said this morning during taping of Iowa Public Television’s “Iowa Press” program. “There’s an assessment form that you have to fill out. You’re required to visit a doctor every two years.”

Reynolds first talked about this issue last fall, during her race for a full, four-year term as governor. Reynolds says the proposal will expand access to the pill and other birth control products for Iowa women, particularly those in rural areas.

“The way that we’re doing it is similar to what we did with Naloxone,” Reynolds said.

That’s the medication which temporarily reverses an opioid overdose.

“So it would be a standing order that would give the pharmacists authority to prescribe,” Reynolds said.

Reynolds indicated the bill is written so women who have insurance coverage of their contraceptives would continue to have that coverage. Reynolds describes the bill as a starting point for debate in the Iowa House and Senate.

“I think any time you drop legislation, you know that’s potentially not where it’s going to end up,” Reynolds said, “but we’ve tried to work really hard to identify any problems that we might run into.”

Utah’s Republican-led legislature embraced this move unanimously last May and Utah’s Republican governor signed it into law. A few other states like California and Oregon have similar laws and bills have been introduced in congress to classify birth control an over-the-counter medication nationwide.