You are here: Home / News / Booker says he aims to win the 2020 Iowa Caucuses

Democratic candidate Cory Booker says the way to win the White House is to avoid bashing and “trash-talking” and, instead, present the country with a different message. 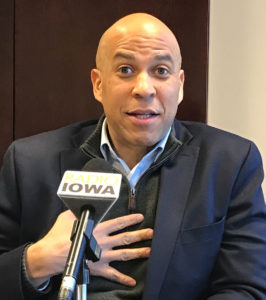 The New Jersey senator made stops in a half-dozen cities, but he started Friday night with a Booker family gathering in Des Moines. His grandmother was born in Iowa and Booker has a large contingent of relatives who live here.

“I came from a family that saw things in me that I didn’t see in myself, you know, that believed I had promise and getting that kind of nurturing soil when a child is believed in and loved, I think there is no limit to what they can’t do,” Booker said.

Booker is a Rhodes Scholar, a lawyer, the former mayor of Newark and he’s served in the U.S. Senate since t e fall of 2013. He told Iowa audiences this weekend he intends to win the Iowa Caucuses.

“It’s the only way I know how to play,” Booker told Radio Iowa. “As a former football player in college, you don’t show up on that field hoping to place. You show up saying you’re going to play hard, work hard on the field and aim to win the game.”

Booker said his playbook will avoid trash-talking his Democratic competitors and President Trump.

During an interview with Radio Iowa this weekend, Booker suggested the country is ready for “Medicare for All” because the health care system isn’t working all Americans.

“Those people that want to demonize things and try to say, ‘Oh, socialism!’ and all these things to try to take the wind out of common sense solutions, I believe now we can build a consensus to get us farther down the road towards universal access to health care,” Booker said.

Booker indicated there’s a role for private insurers in countries which have universal, publicly-provided health care. As a first step, Booker envisions enrolling Americans in Medicare once they reach the age of 55.

“First of all, it would take us middle aged guys and others out of the private markets,” Booker said. “…Premiums and costs for the average person, they would go down.”

During his Radio Iowa interview, Booker expressed concern about what he called “corporate agriculture.” Booker has proposed a moratorium on mergers like the recent Bayer-Monsanto merger approved by Trump Administration’s justice department.

“It came after going to the Midwest and sitting with farmers, Republicans and Democrats, and listening to their stories about what’s happened to their culture, to the heritage of this country and how different farming is from their grandfathers and their fathers, when they had five and six people to sell their goods to,” Booker said, “or the source materials when they had far more competition in the seed sector and others.”

Booker discussed his approach to trade and tax issues during his interview with Radio Iowa, as well as the advice he got from a former presidential candidate who won 40 percent support in the Iowa Caucuses held 19 years ago.

Massachusetts Senator Elizabeth Warren also campaigned in Iowa Sunday, less than 24 hours after she formally kicked off her presidential campaign. Warren told a Cedar Rapids crowd Donald Trump “may not even be president” in 2020.

“In fact, he may not even be a free person,” Warren said, to cheers.

Warren suggested Democrats shouldn’t respond to the latest “racist tweet” from Trump and, instead, focus on fixes for the nation’s political system.

South Bend, Indiana Mayor Pete Buttigieg, a potential candidate, campaigned here Friday and Saturday, mentioning the book he is releasing this week. Buttigieg described himself as a “non-traditional” candidate.

“Frankly, if you had asked me 10 years ago I would have believed that either you could be out or you could be in politics, not both and now I’m addressing a room full of people in Iowa about my hopes for our country with my husband looking on in the back of the room,” Buttigieg said, to applause from the gathering of Ankeny Democrats.

Buttigieg said there’s an appetite for something new in the Democratic Party, but there has to be substance behind it.

“I think it’s a moment in the party where we’re deciding what the future is going to look like and so the wider range of ideas and styles and tones and messages we can have, the better,” Buttigieg told reporters.

Blair Spotts of Altoona once worked as an engineer for the City of South Bend, so Buttigieg was her boss and she said he’s the kind of candidate she’s looking for.

“Someone with new, fresh ideas, who isn’t necessarily been in politics their whole life,” she said before Buttigieg spoke in Ankeny, “so I don’t want a career politician.”

Buttigieg, who turned 37 last month, would be the nation’s youngest president. He has been South Bend’s mayor for seven years.