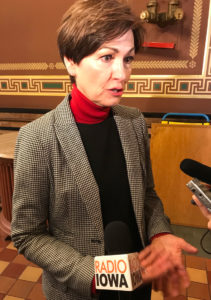 Governor Kim Reynolds is hinting she may have reservations about a bill that would end the permit process for buying and carrying a concealed handgun in Iowa. Yesterday, a Senate subcommittee advanced a plan to do away with the gun permit requirement.

“I was actually in the legislature when we passed the ‘shall issue’ bill for gun permits with a background check, was very supportive of that legislation and so we’ll see what happens through the legislature,” Reynolds said late this morning. “We’ll watch the bill, but, you know, I do support the bill that I voted for…and thought it was good policy.”

Reynolds was a member of the state senate in 2010. The law enacted that year removed the discretion county sheriffs had in denying gun permits. The law created a statewide standard and requires sheriffs to issue gun permits, with very limited exceptions.

Reynolds indicated her staff will track the bill that would do away with that permit process, including the background checks.

“I’m going to keep an open mind, but I support the legislation that I voted for in 2010,” Reynolds told reporters at the statehouse today.

A year ago, Reynolds called Iowa’s gun laws “reasonable and responsible” and she expressed support for retaining the permit process for acquiring handguns. Today, Reynolds told reporters she has often thought about applying for a permit to carry a concealed weapon.

“I keep talking about it. I just can’t find the time to get it done,” Reynolds said. “…I do go hunting, though. I have shot a nine-point buck my first time out with a muzzle loader, so beginner’s luck.”

Reynolds and her husband were hunting near Centerville in early 2015 when she shot the deer.