You are here: Home / News / Historic Warrior Hotel being renovated in Sioux City 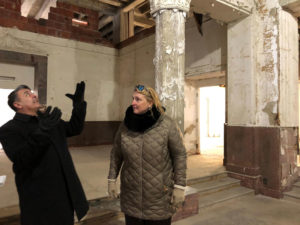 Inside of the Warrior Hotel.

A long-closed, historic hotel in Sioux City is being restored to its previous splendor.

Owners and developers Amrit and Amy Gill are investing tens of millions of dollars to renovate the Warrior Hotel and the adjacent Davidson Building into a 148-room Marriot with 22 apartments. The Warrior has been vacant for more than 40 years. Amrit Gill says the building has a lot of potential.

“Every building has a sense in it,” Amrit Gill says, “I think, I can sense this building is thrilled that it’s finally going to be put back into use, personally. Call it sappy.” The new Marriott will include a bowling alley, spa and other amenities, while the apartments will be on the top two floors. Amy Gill says they’re planning to keep the hotel’s classic decorations and historic style.

“It will be very art deco, very gloriously sexy, mysteriously beautiful interiors,” Amy Gill says. “I think that it lends itself to a five-star hotel because it’s very rich, it’s very glamorous.” The project is a $73 million investment and it’s scheduled to open in the summer of 2020. The Gills have also renovated two hotels in downtown Davenport.