You are here: Home / Fires/Accidents/Disasters / DOT could end up with a record use of salt and sand on roadways 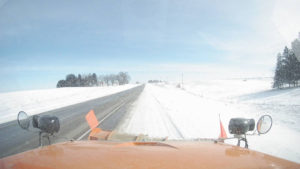 DOT plow camera from I-9 in Northeast Iowa.

All the snow and wind we’ve had on the last couple of days is keeping the big orange DOT plow trucks on the roads they could end up using a record amount of salt and sand.

DOT Winter operations administrator, Craig Bargfrede, says the last two days haven’t given them any rest. “If this continues to go — this could be one of our record-setting usage years. Typically through a winter season we average somewhere between 130 and 140,000 tons on average — and we’ve blown past that,” Bargfrede says. He says the usage could hit some 200,000 tons or more.

He says the high winds have caused a lot of issues. “We’re keeping up as best as possible, it’s sure been a challenge the last couple of days, especially yesterday afternoon when with the winds as hard as they were blowing, A lot of blowing and drifting and ground blizzard conditions,” Bargfrede says.

Blowing snow can be the worst thing the plow drivers face. “We actually had some conditions over in eastern Iowa around Cedar Rapids and east of Cedar Rapids where the blowing and drifting caused some roads to close for a period of time,” according to Bargfrede. Bargfrede says drifts aren’t the only issue when snow is blowing across roadways. “You get the temperatures just right and then that snow sticks to the pavement and we get that layer of ice that we’ve seen in many parts of the state,” Bargfrede says.

The cold temperatures make the salt and brine the trucks put down less effective in dealing with that ice. “It just adds to the challenge of trying to be able to treat that properly and break up that thin ice layer,” Bargfrede says. While they are using a lot of material on the roadways, Bargfrede says their only supply problem is getting through the weather to re-supply the areas that need it. “In some areas things are stretched and we are struggling just a little bit there — but we are not out of material — so rest assured we still have material and options for treating the roadways,” Bargfrede says.

The DOT has roughly 1,000 full time employees and they try to hire around 600 part-time to work on the snow removal efforts.