You are here: Home / News / Westwood school bus hit by train, no injuries 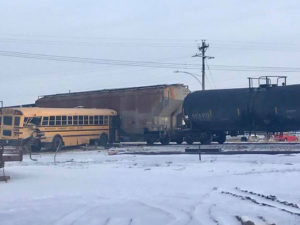 No one was hurt in this bus-train accident.

No one was hurt this morning when a school bus was struck by a train at a rural crossing in northwest Iowa’s Woodbury County.

Major Todd Wieck of the Woodbury County Sheriff’s Department, says the accident happened just after 7:30 a.m. “The driver told our personnel that the bus had stalled on the tracks and he couldn’t get it started to get it off the tracks and they saw the train coming ,” Wieck says. “The driver and another occupant that were on the bus obviously got off the bus because they knew it was going to get hit by the train.”

The bus was from the Westwood Community School District. It was struck near the rear end and was spun around almost 180-degrees. The Iowa State Patrol is conducting the crash investigation.