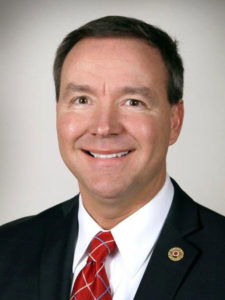 A long-time legislator from Cedar Falls resigned abruptly this afternoon.

Democrat Jeff Danielson had been a state senator since January of 2005. He’s a Navy veteran and for the past 25 years he’s worked as a Cedar Falls firefighter. He resigned from that job tody, too. Danielson told the Iowa Starting Line blog and KWWL Television that he wouldn’t be leaving the state senate if he hadn’t decided to leave his fire fighting job.

According to The Waterloo Courier, at least eight other Cedar Falls firefighters have resigned in the past five months out of frustration over the city’s decision to train police to perform fire department functions.

Danielson told KWWL he had a new job in the Cedar Falls area, but details of that job were still under wraps late this evening.

Danielson’s senate district covered all of Cedar Falls, the community of Hudson and a portion of Waterloo. He won the district by 18 points in 2016. The governor must now schedule a special election to select a replacement who’ll serve the district until the 2020 election. The district looks to be competitive ground for both parties. There about about 850 more registered Democrats than Republicans in Senate District 30.

Resignations during a legislative session are rare. On the morning of March 21, 1997, though, Republican Jim Lind announced on the senate floor he was resigning and abruptly left the capitol. Lind, a gas station owner from Waterloo, had served in the senate for 11 years, first winning a special election in 1986 to serve out the remainder of his late father’s term in the state senate.