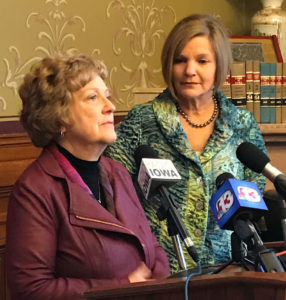 Senator Amanda Ragan of Mason City says firing the private companies is not an option since Republicans remain in control of the legislature and the governor’s office. “Governor Reynolds and the Republican legislature is probably not going to change from having privatized Medicaid,” Ragan says, “but we still believe there are fundamentally different things we can do to make this system better.”

Democrats in the legislature and the Democratic candidate for governor campaigned last year on returning Medicaid to direct state oversight. Ragan, who manages a soup kitchen in Mason City, is cosponsoring a bill calling for an independent third-party to handle appeals when the private companies deny care or services to Medicaid patients.

“We certainly are not going to discontinue advocating for the things we believe in,” Ragan says. “We’re going to stand up for the importance of giving care to the individuals needing the services. We also are concerned about the providers.”

Senator Liz Mathis of Hiawatha is co-sponsoring the bill with Ragan. In addition to changes in how Medicaid is delivered through the private companies, it calls on the firms to find ways to expand the number of health care workers in Iowa. “It doesn’t mean by taking someone else’s employees, that’s helping the workforce,” Mathis says. “It means training people. It means recruiting people into health care occupations and specifically the more difficult occupations that help Medicaid patients.”

Mathis works for a Cedar Rapids-based non-profit that provides counseling and other services to children and families.