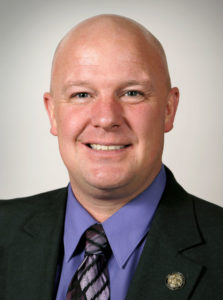 New requirements for welfare recipients in Iowa are being considered — and some are being shelved — in the Iowa Senate. Senator Jason Schultz, a Republican from Schleswig, has sponsored four bills on the subject.

“I hear constantly from constituents who are frustrated,” Schultz told statehouse reporters. “They feel that they’re going to work every day, paying taxes, these taxes are going to people who are not going to work and could.”

One bill eligible for committee action would stop food stamp benefits for some adults who are currently exempt from work requirements. Bill backers say their aim is to get parents with school-aged children to train for a job. The Trump Administration is awarding waivers to states promoting the “workfare” concept in public assistance programs.

The other proposal would require welfare recipients to report their income every three months to confirm they’re still eligible for benefits.

“This is our bill,” said Karla Fultz McHenry, a lobbyist for the Florida-based non-profit called Opportunity Solutions Project. “We brought this forward because we believe strongly that welfare fraud does exist,” she said. “…Ten other states have passed this legislation and found that there were significant people that were fraudulently on the rolls.”

Charlie Wishman of the Iowa Federation of Labor suggested there’s a better approach to moving people off welfare.

“If the state of Iowa is serious about addressing its workforce issues, the way to do it is not by punching down at people who need help,” Wishman said. “Maybe we can look at raising the minimum wage.”

Jack Reardon of Des Moines is a member of Iowa Citizens for Community Improvement, a group that opposes these bills. He told lawmakers his family is on the brink of financial collapse.

“My mom’s car broke down and it’s going to cost $600 to fix it,” he said. “…To see people like you come in here and introduce a bill that will take money from my family makes me physically sick.”

Two other welfare-related proposals in the Iowa Senate have been tabled. One attempted to require food stamp recipients to show some sort of photo identification at the store. The other would have imposed new work requirements on adult Medicaid recipients who live above the poverty line — but state officials can’t say how many of the 170,000 Iowans who would have been affected aren’t already working.