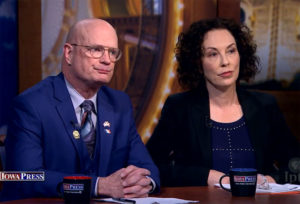 A GOP proposal on the legislature’s agenda this month would change who selects half the members of the commission that sends the governor nominees for vacant judgeships.

Vanderbilt University professor Brian Fitzpatrick spoke recently at a Des Moines event organized by the Iowa Lawyers Chapter of the Federalist Society. “Lawyers are no less political than anyone else when they are on these judicial selection bodies,” Fitzgerald said.

Today half of the members of the Iowa Judicial Nominating Commission are lawyers elected to the commission by other lawyers. Representative Steven Holt, a Republican from Denison, says fewer than one out of five Iowa attorneys votes in the elections for commission members.

“We’re talking about a system that I believe is not representative of the people because you’ve got 18.45 percent of this attorney group placing these folks on the commission,” Holt says, “and I don’t think that is the way we need to do it.”

Holt is leading House consideration of the GOP’s plan to have the top four legislative leaders from both parties appoint half the Judicial Nominating Commission members. Representative Mary Wolfe, a Democrat from Clinton who is an attorney, opposes the move.

“If we switch to this plan, the people of Iowa are going to have to walk into courtrooms, knowing that we are putting politics first,” Wolfe says.

The legislators made their comments this weekend during an appearance on Iowa Public Television’s “Iowa Press” program.