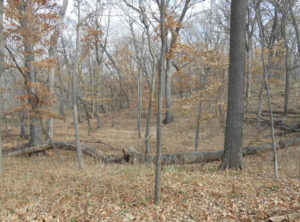 A pilot program in its first year at Big Creek State Park near Des Moines is using black locust trees as a raw material for hand-crafting wooden log chairs.

Iowa DNR park manager Chad Kelchen says the trees are considered an invasive species so it’s a bonus to be able to make use of them in a worthwhile fashion. “It’s not the furniture component I’m after,” Kelchen says. “I’m after the whole end user, that’s the ultimate goal. I’m tired of just piling the stuff and burning it. Somebody’s got to have a use for it.”

State law allows the public to harvest the black locust trees with a special permit. Kelchen says since the trees are invasive, this is a great way to repurpose them.

“When you start talking furniture and stripping down these big trees, standing out in the timber, it’s hard to get an idea of what you’re looking at doing,” he says. “When I talked the first person into it, he talked his friends into it and they had a lot of fun. And that’s what this program is about, having fun, learning a little bit and getting something done.” 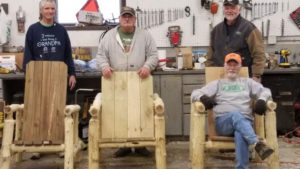 Chairs made from black locust trees.

So far, two volunteer groups have participated in constructing three log chairs through 40 hours of in-kind service. The chairs will not be sold. Instead, they will be used at cabins at Springbrook State Park, about an hour west of Des Moines.

Kelchen says it’s likely the program will be offered again next winter.

(Thanks to Pat Blank at Iowa Public Radio)