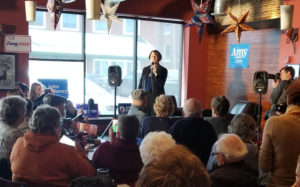 “It is wonderful to be back in Mason City on a wonderful sunny day,” Klobuchar said Saturday before joking: “I left my snow globe behind.”

Klobuchar kicked off her campaign for the White House eight days ago with an outdoor speech in her home state of Minnesota – during a snow storm. Yesterday Sunday afternoon, Klobuchar met with Iowans in Knoxville and Albia, promising to bring Midwest pragmatism to the Oval Office if she’s the next president.

“When you drive the snowstorm in Iowa today, you think about all the people who for so many years that worked hard to earn a living and continue to work hard to earn a living,” Klobuchar said, “and one of the things that I have done in Minnesota because we’ve got a metropolitan area and rural is try to bridge that divide.”

Klobuchar,, who has been a U.S. Senator since 2007, calls her approach “heartland economics.”

“Making sure we make the case that one size doesn’t fit all, that you’ve got special needs for rural hospitals, that you’ve got special needs for how we run our schools and other things, but it’s also about governing from the heart,” Klobuchar said, “and that means everyone’s got to have everyone’s backs and got to take on some of these special interests whether it’s health care or whether it’s the tech companies.”

John Delaney, the former Maryland congressman who’s been running for president since 2017, was in the state this weekend as were two other Democrats who say they’re considering a run for the White House.