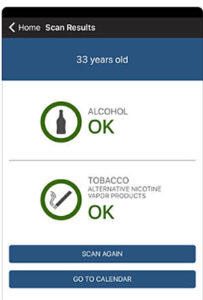 The app can verify if an ID is real.

ABD spokesman, Jake Holmes, says the app replaces the low-tech device that was once the common tool. “We used to send out age-to-purchase calendars to retailers — like desktop calendars — and we discontinued those, so we decided to put that view on a smartphone app,” Holmes says.
The smartphone app does the work for retailers that the calendar didn’t do. “You’ll be able scan the barcode on an ID — you’ll be able tell you how old the person is and then offer some validations methods to ensure that it is a real ID,” Holmes says.

Holmes says they work with the Iowa DOT and others to build in security features to help the app determine if the ID is real. “If the app scans an ID and thinks that it is not valid, it’ll pop up and say ‘unable to validate.” And then it’ll suggest asking for another form of ID,” Homes says. “The same holds true if it’s expired, it’ll tell you it’s expired and ask for another form of ID.”

Holmes says they put the app through its paces in a test program. “Drake University tested it out at their home basketball games and they were really happy with it. It sped up the process of checking ID’s. They said it was very easy to use,” Holmes says. He says the app is another tool retailers can use in preventing the sale to underage customers. “The intent is to crack down on some of these fake ID’s because the fake ID’s nowadays are getting better and better, and we wanted something in place to help curve that,” Holmes says.

Holmes says this app gives every retailer an affordable option. “Some stores have as part of their registers they can scan ID’s. There’s various companies that produce scanners that some stores already use — be we wanted to make something for free that was available to everybody that needed it,” according to Holmes.

The Iowa ABD “Age to Purchase App” is available to download for free from the App Store and Google Play Store.