You are here: Home / News / Here we go again, more heavy snow in the forecast 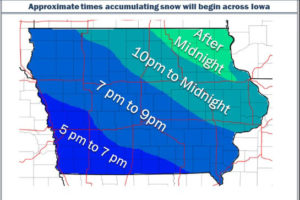 Forecast times for the latest round of snow.

Snowfall records set in Iowa more than a century ago are expected to be broken with the massive approaching winter storm.

Meteorologist Allan Curtis, at the National Weather Service in metro Des Moines, says most of the state is under a Winter Storm Warning from 6 p.m. through noon tomorrow — and heavy snow is expected.  “People can think of it as a near-carbon copy of what we saw last weekend,” Curtis says. “We’re looking at a widespread six-to-eight inch, maybe locally-more, snowfall beginning this evening and ending tomorrow morning. Thankfully, it’s most likely going to be light, fluffy and very little wind.”

Most areas of Iowa have seen repeated snowfalls in recent weeks with little melting, so the mounds along our driveways, sidewalks and parking lots are already resembling small mountains. Soon, they’ll be even higher. “Areas that may potentially see nine-to-ten inches or anything like that are going to be primarily across the western half of the state,” Curtis says. “It’s hard to nail down exactly who’s going to see that, but suffice it to say, it’s going to be generally west of I-35 that we’ll have the greatest chances to see that.”

Much of the state had temperatures in the single digits both below and above zero this morning and Curtis says there’s a slight warm-up coming.
“We will see temperatures reach right around freezing or at least in the mid- to upper-30s to end the week,” Curtis says. “Unfortunately, we have another system looking to effect the state on the weekend that’s going to cool us back off a bit. The good news is, the cold temperatures we saw this morning across a lot of the state is not expected over the next few days.” 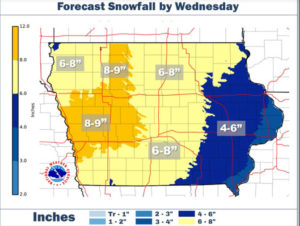 Many Iowa communities have already broken or will soon break snowfall records, some of them more than 100 years old. “Des Moines and Waterloo are just a couple of inches shy of their record February snowfall and they’ll almost certainly break it come this time tomorrow morning, and obviously, we’ve still got some time to go in the month,” Curtis says. “There’s other records, like 2019 year-to-date snowfall records that are potentially going to fall at a number of sites as well.”