You are here: Home / Fires/Accidents/Disasters / Fire departments ask for help in keeping hydrants clear of snow 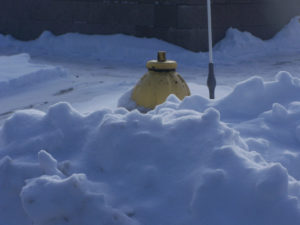 Buried fire hydrants could cause delays in fighting fires.

Record snowfall has caused a lot of issues on the roadways across the state and fire departments want some help to keep the heavy snow from becoming an issue for them.

He says the delay could be crucial in attacking the fire. “We want to make sure that we’re not having to use a lot of time to get the water supply to our truck, so that’s why were are asking citizens to help us out,” Schipper says. Schipper says there are more than 600 fire hydrants located within the city limits, so his crew can’t clear all hydrants.

“What we look for is a three-foot clearance around them, and then also if they could give us a path to street — because that’s where our hose has to lay to get to the truck,” according to Schipper. “So, that’s kind of what we are asking the public to help us with these next few days, and it sounds like this weekend is going to be even worse.”

Schipper says you should clear any hydrants near your house, and if there isn’t one there, check for hydrants on the corner that need to be cleared out.