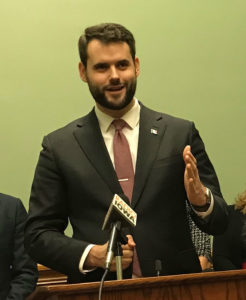 A group of Iowa legislators who are under the age of 40 have formed an “Iowa Future Caucus” to show bipartisan cooperation is possible. Twenty-nine-year-old State Senator Zach Wahls  — a Democrat from Coralville — is one of the group’s co-chairs.

“I think we’ve brought together a good group of lawmakers who are really committed to trying to figure out what are the issues…that aren’t yet partisan and how do we make progress on those issues,” Wahls says.

Their initial effort is to focus on ways to grow Iowa’s population and stop the so-called “brain drains.” Thirty-nine-year-old State Senator Zach Nunn — a Republican from Bondurant — is another co-chair of the group.

“What this team is bringing forward is the opportunity for collaborative work and we have a good foundation for this,” Nunn says. “Last year the legislature passed over 88 percent of all legislation on a bipartisan fashion. We’re not treading new group, but we’re really trying to grow where there is already fertile soil.”

Thirty-eight-year-old Lindsay James, a Democrat from Dubuque, and 21-year-old Joe Mitchell — a Republican from Wayland — are the Iowa House members who are co-chairs of this group. Iowa is the 28th state to join the “Future Caucus” network. The Millennial Action Project has been promoting the effort since 2013. Steven Olikara, the group’s founder, says bipartisan “bridge building” is rooted in the tradition of America’s founding fathers.

“The founding fathers, virtually all of them — Madison, Jefferson, Washington — all warned us of the dangers of extreme partisanship,” Olikara says. “In fact, that was one of the main themes of Washington’s farewell address.”

The Iowa Youth Caucus members met for dinner last night at the Des Moines Social Club and began brainstorming about issues they’d like to tackle. The group held a news conference this morning at the capitol. Six members of the Iowa Senate and at least a dozen members of the Iowa House are under the age of 40.