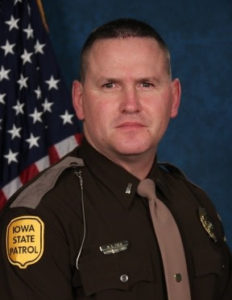 A new leader for the Iowa State Patrol will be sworn in Friday.

The Department of Public Safety Commissioner Stephan Bayens has seleced Captain Nathan Fulk to take over as the 17th Chief of the Iowa State Patrol. Fulk is a 22-year veteran of the patrol, who has most recently been serving as an area captain in central Iowa.

Fulk was born and raised in southeast Iowa, and enlisted in the Marine Corps in 1992. He joined the State Patrol in 1997 as a trooper in Solon. He was promoted to Sergeant in 2008 and Lieutenant in 2013. He has served as the Bureau Chief for the Department’s Professional Development Bureau and Camp Commander of the Department of Public Safety’s Basic Academy.

Fulk lives in Ankeny with his wife, Vicki, and their two children, Weston and Eva. He replaces Colonel Jeff Ritzman, who retired January 2nd.