You are here: Home / Fires/Accidents/Disasters / Investigators looking for cause of fire at Fairbank ethanol plant 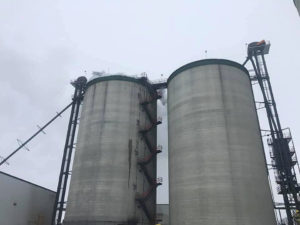 Smoke is coming out of the top of the plant.

Several fire departments in northeast Iowa were dispatched to what could have been a disastrous situation, when an ethanol plant near Fairbank caught fire.

The fire began late Wednesday morning in a silo at the Flint Hills Ethanol Plant, located just east of the city. The smoldering fire could be seen at the top of the silo. Firefighters were able to keep the fire suppressed, and from spreading to other buildings on the property. They remained at the scene into the night.

No injuries were reported, and a damage estimate has not been tallied. The cause remains under investigation.