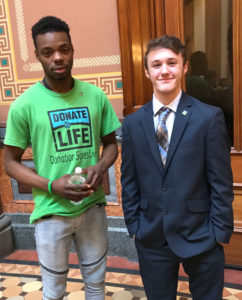 Logan Luft’s friends were at the Iowa Capitol for Wednesday’s debate.

Wednesday was Organ Donor Awareness Day at the Iowa Capitol and Senators used the occasion to unanimously pass a proposal called “Logan’s Law.”

It would let Iowans put a symbol on their hunting and fishing licenses indicating they wish to be an organ donor. It’s named after Logan Luft, a 15-year-old from Charles City who died in a an ATV accident. Senator Waylon Brown said because Logan had expressed his interest in organ donation, he ultimately gave the gift of life to others.

“I, too, had a daughter who died last summer and she donated five organs as well,” Jochum said of her 31-year-old daughter Sarah. “…It’s amazing how we sit here and write laws on organ donations…and this was one time here I actually got to experience how those laws play out and what a difference it makes in the lives of many, many people in our state and in our country.”

Senator Craig Johnson of Independence talking about his 61-year-old uncle, Bob, who died of a massive heart attack just before Christmas. The family made the decision to donate his organs.

“I had a message just a little bit ago from his sister: ‘There is nothing better being loved by an organ donor, knowing a part of them lives on after they are gone,'” Johnson said.

Wendy Luft and her husband were on the Senate floor as the bill was debated and passed unanimously.

“Lenny and I have been down here for the last three weeks, and have been able to speak with our legislators and have great conversations with them and everybody’s been really supportive of us, but to sit down on the floor and be able to hear about other people’s experiences with organ donation and tissue donation — it was so impactful,” Wendy Luft said. “It makes us feel like we’re not the only ones.”

Logan Luft’s siblings, other relatives and a couple of teenage friends from Charles City made the trip to Des Moines for the senate debate. Alex Staudt said Logan’s legacy is helping spread the word about the importance of being an organ donor.

“When I was listening to the debate today, it kind of just brought back some of the good memories I have of Logan, some of the times we spent together,” Staudt said.

Linking organ donation intentions to hunting and fishing licenses is a great way to honor Logan according to Antoine Cooper.

“He taught me how to fish…How to put the hook on and actually take it out of the fish’s mouth,” Cooper said. “It was great.”

The bill Logan Luft’s family and friends are lobbying for has been introduced in the House, but no action has been scheduled on it there.