You are here: Home / News / Surf Ballroom nominated for an Academy of Country Music Award 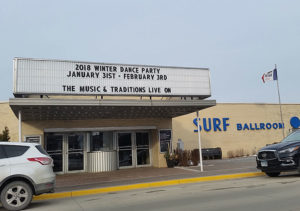 The Surf Ballroom in Clear Lake is up for a national honor.

The venue is one of five nominees for the Academy of County Music Award’s “Venue of the Year-Small Capacity.” The announcements of the ACM nominees were released on Wednesday. The other venues up for the award include the House of Blues in Anaheim California, the House of Blues in Boston, Floore’s in Helotes Texas, and the Ryman Auditorium in Nashville Tennessee.

The Venue of the Year Small Capacity award recognizes an outstanding venue with a maximum capacity of 4,000. The 54th annual ACM Awards will be handed out on April 7th.