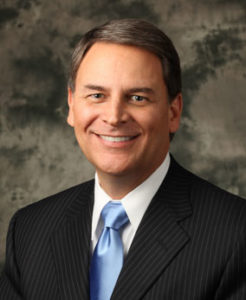 The president of the National Association of Manufacturers made a few stops in Iowa Thursday as part of his nationwide tour.

Jay Timmons says the purpose of the tour is to spread the word about the industry. “We spend a lot of time talking to young people and those who are trying to figure out what they want to do in terms of their career. And pointing to modern manufacturing facilities as exciting and rewarding.”

Timmons says one of the things they are trying to show is the way the industry has changed. “Folks think about manufacturing as what it was like in their parents day and their grandparents’ day. It’s very, very different form that now,” Timmons says. “Manufacturing is very technology driven, very clean, very sleek. You think about robotics, artificial intelligence, augmented reality. All of those processes now require a different skill set to operate them.”

He says all it takes is to show young people a working plant. “When you actually expose young people to a manufacturing facility today, you see their eyes light up and the get pretty excited about those possibilities,” he says. One thing Timmons says he tells young people is the pay scale in manufacturing. “So in Iowa for instance — the average manufacturing compensation….is $68,000 — that’s compared to $42,000 for the average job in other sectors of the economy,” according to Timmons.

He says they also explain how you can get a degree that doesn’t take four years and a lot of money to get that beginning level of salary.”You don’t have to start our your career with $200,000 in college debt,” Timmons says, “we always think that’s a pretty good plus when you don’t have to deal with that for a number of years.”