You are here: Home / News / Have you heard this one before? Winter storm packing rain, sleet, snow on the way 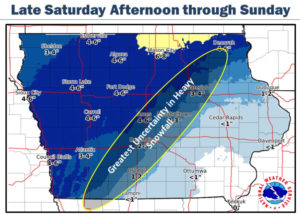 Forecasters say Iowa will get another one-two punch from winter weather this weekend, with the potential for rain, sleet, snow, ice, blizzard conditions and even flooding.

Meteorologist Chad Hahn, with the National Weather Service in metro Des Moines, says the first round tonight won’t entail much snow, if any, though a layer of ice is threatened. “Expect freezing drizzle to develop across much of the state of Iowa later on this evening and overnight,” Hahn says. “Even some light glazing is possible across portions of the state overnight and that will continue into the morning hours on Saturday.”

Temperatures are predicted to warm up into the upper 30s tomorrow, changing the snow to rain and raising the chances of ice dams, ice jams and flooding. “We’ll have a break as we get into the day on Saturday where we actually transition much of the state into rain but it’ll be pretty short-lived because the colder air will filter in later on Saturday afternoon and especially overnight on Saturday night,” Hahn says. “We’re expecting significant accumulating snows across the central part of Iowa.”

The heaviest snow is forecast to fall roughly from the Omaha area to Fort Dodge to Mason City. That region may see six to eight inches of snow. As the storm front moves through Iowa, there’s the potential for blizzard conditions on Sunday. “Winds are going to increase significantly behind the low pressure area with wind gusts out of the northwest at 40 to 50 miles an hour,” Hahn says. “In areas that do see that snowfall, they can expect significant blowing and drifting as we work into Saturday night and during the day on Sunday.”

A series of winter weather advisories, watches and warnings are being posted through Sunday for wide sections of the state. Visit weather-dot-gov for details. In the long-ranger forecast, Hahn says we may see more snow Monday and Tuesday in what’s already one of the snowiest Iowa Februarys on record.