You are here: Home / Education / Repairs to Waterloo elementary school could take months after roof collapse 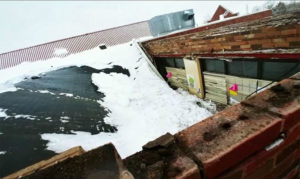 Beginning Tuesday, Lowell’s 400 students and staff will be relocated to the former Area Education Agency 267 Conference Center in Cedar Falls. Waterloo Schools Superintendent Jane Lindaman says the move is necessary after a segment of Lowell’s roof caved in under heavy snow Wednesday morning.

According to Lindaman, structural engineers and contractors who surveyed the damage at Lowell on Thursday determined that repairs will take months to complete.

Repair and relocation costs have not been determined. A winter storm forced the cancellation of classes district-wide in Waterloo on Wednesday, so no one was in the classroom when the roof collapsed.