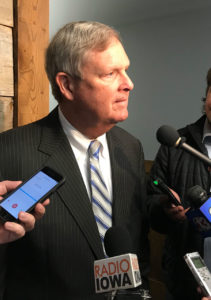 Former Iowa Governor Tom Vilsack has decided against running for the U.S. Senate. For the past couple of months, Vilsack had been meeting with privately with influential Democrats and supporters of his previous statewide campaigns in 1998 and 2002 — discussing a potential challenge to Republican Joni Ernst’s bid for reelection next year.

Vilsack hinted at a run in December, suggesting Ernst’s record might be vulnerable.

“Make ’em squeal, I don’t know. Have we made even these folks squirm at all? I haven’t see it,” Vilsack told reporters. “But I think a ‘Happy Warrior’ — I think we’re ready for that.”

Iowa Democratic Party chairman Troy Price issued a written statement this afternoon, saying Democrats appreciate Vilsack’s “thoughtful and deliberate consideration of making a run for the seat.” Price added there will be a “spirited primary” to select the Democrat who’ll challenge Ernst in 2020.

Vilsack got his start in politics as mayor of Mount Pleasant. He won election to the state senate in 1992. In 1998, Vilsack was the first Democrat elected governor in more than three decades. Vilsack briefly ran for president after serving two terms as Iowa’s governor. He served eight years as U.S. Secretary of Agriculture during the entire Obama Administration.

Vilsack is currently the president and CEO of the US. Dairy Export Council.