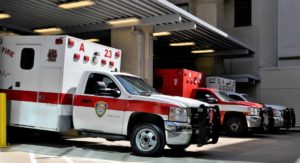 The trip to a northeast Iowa hospital was anything but routine for a pregnant woman who went into labor early Sunday morning.

With 50 mile-per-hour winds creating zero visibility around 3 AM Sunday, Fairbank firefighters were called out to rescue an ambulance, which got stuck in a snow drift near the Wapsipinicon River.

According to a news release, fire crews used tractors and trucks with plows to get to the ambulance’s location.

Once there, they moved the patient to the Fairbank Fire Department’s ambulance and transported her to an area hospital.

Firefighters then freed the stuck ambulance.

Fairbank fire officials later reported that the woman was in good condition at the hospital.