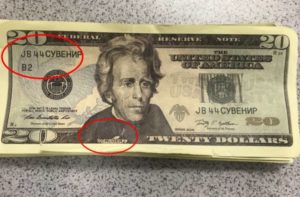 Iowans are being warned to be on the look-out for counterfeit $20 bills that are circulating around the region.

Le Mars Police Chief Kevin Vande Vegte says merchants of all kinds and individual consumers need to be watchful for the bogus bills.

Chief Vande Vegte says, “We have not actually seen any in Le Mars yet, however things seem to trickle towards us and we wanted to give everybody a heads up before they started coming across them.”

The counterfeit bills aren’t printed on the high-quality paper as real currency, so that’s a tip-off.

“If you pull a bill out of your pocket, it’s got a certain texture to it, a certain feel. As you rub your fingers across it, you can feel where the thread is built into the paper,” Vande Vegte says. “That’s the first give-away. If it feels like it just came out of the printer, it’s likely a counterfeit.”

There are other, more obvious signs, that the bills are fake — all you have to do is look more closely.

“A lot of the bills are inaccurate,” he says. The latest one has “Kruger” where “Jackson” should be under the president’s picture on the twenty. There’s also a typo on the serial number where the “N” is backwards.