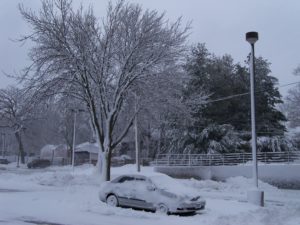 The University of Minnesota men’s gymnastics team has been stranded in Iowa because of the blizzard. Head Coach Mike Burns says they were forced to stay in Des Moines Sunday night due to mechanical trouble on their bus ride back from competing in Nebraska.

“They actually sent another bus down from Minnesota at 6 a.m. and it’s still en route,” Burns says. “And we said: ‘Well, if we can’t get home in time for practice, let’s find a local gym.'”

As the team practiced, the bus sent to fetch them has taken backroads — to avoid Interstate-35 which had been closed.

“Hopefully by the time he gets here, I-35 will be open and if not, we’ll follow the trail of bread crumbs he left,” Burns says.

Burns says there’s sunshine and it’s not snowing in Des Moines — and that seems a bit like Shangri-La compared to what’s happening up north. Blizzard conditions continue to hamper travelers in southern Minnesota, with major snow drifts blocking portions of I-35 and I-90.

(Reporting by Mike Grimm of the Minnesota News Network)