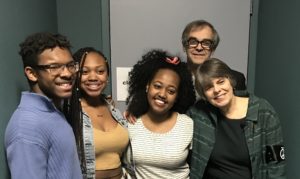 Sunday was the 50th anniversary of an historic U.S. Supreme Court ruling on student free speech rights that was sparked by three students from Iowa.

In December,1965 Mary Beth and John Tinker, along with a friend, wore black armbands to school in Des Moines to protest the Vietnam War. John Tinker said black armbands have been worn as a symbol of mourning for centuries.

“It’s a silent, non-disruptive symbol and so we thought it fit what we were trying to do very well,” Tinker said.

The Tinker siblings and their friend were sent home and threatened with expulsion for wearing the armbands. The parents of the three teens sued on their behalf and four years later the U.S. Supreme Court ruled a student’s right to free expression doesn’t end “at the schoolhouse gate.”

“It declared that students in the public schools are persons under the law and are endowed with their First Amendment rights,” Tinker told Radio Iowa.

Tinker and his sister were featured in a day-long event at the State Historical Building on Friday. More than 200 Iowa students attended. There was a national livestream discussion with students in other states as well.

“Having stood up for what we believed way back then about the war in Vietnam and having the courts vindicate us — I think that helps the students today understand that if they’ve thought about an issue and if they feel strongly about it, that they do have the right to speak out about it,” Tinker said, “and I encourage them to do that.”

Tinker and another high school student were 15 years old when they wore black armbands to school to protest the Vietnam War. His younger sister, Mary Beth, also wore an armband to school. She was 13 and in junior high.