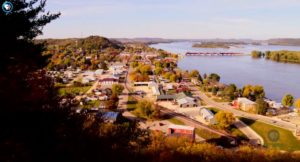 One of many stunning views from the documentary.

A new documentary will begin airing next week on Iowa Public Television that highlights the many different landscapes and features of Iowa — from a bird’s eye view.

Andrew Batt is the executive producer for the hour-long production called “Iowa Land and Sky.”

He says they used drone-mounted cameras to do the filming, while the inspiration for the project was several years in the making.

“We all have seen those social media posts of that one neat shot from a drone from someplace,” Batt says, “but we thought, what if we could put together an entire documentary of the entire state from those unique perspectives.”

A wealth of planning was involved in the project to determine which locations were not only going to be filmed but which shots would also make the final production.

“We cannot have an hour documentary and be in every county, but we can be in the Loess Hills. We can be in cities along the western rim of Iowa. We can go up and down central Iowa, south-central Iowa and all along the Mississippi,” Batt says. “We wanted to have geographic diversity and some of these cultural icons that make us Iowa.”

He says the initial process involved learning how to use the equipment while also learning the project was at the mercy of Mother Nature. Shooting was often called off because of strong winds, rain and other foul weather.

“It took about two years and most of that wasn’t necessarily all flying,” Batt says. “Most of the first year was preparing, training, getting certified, acquiring gear and getting our drone legs under us. Then, the second year we got around to a lot of the places, a lot of the seasons, and just hoped for some good fall color and a nice spring.”

The documentary will begin airing on IPTV on March 6th at 6:30 PM.