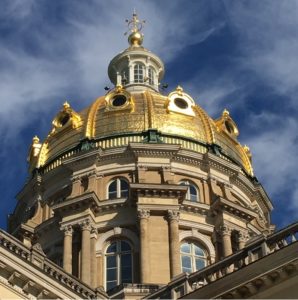 A bill that would re-establish the death penalty in Iowa has emerged in the Iowa Senate, but it’s unlikely to become law.

A key member of the Iowa House who supports the concept of capital punishment tabled a similar plan last year. He concluded it costs taxpayers less to put someone in prison for life than to pay for years of legal challenges to a death sentence.

Governor Kim Reynolds, when asked about the bill’s prospects during her weekly news conference, said  Senators now have an opportunity to discuss the issue.

“But there’s a lot of things that go into considering that and I haven’t seen any shift from where we were last year,” Reynolds said Wednesday.

House Speaker Linda Upmeyer of Clear Lake doesn’t sense a death penalty bill is a priority for her fellow Republicans in the House.

“Sometimes I hear from people: ‘I want to do this.’ ‘I want to work on this,'” Upmeyer told Radio Iowa and The Cedar Rapids Gazette. “I have not heard that, so I guess that would surprise me if that became an issue.”

Another wrinkle in this year’s debate is an announcement last August from the head of the Catholic Church. Pope Francis said the death penalty is “inadmissable” and it’s the goal of the church to abolish capital punishment worldwide. Tom Chapman of the Iowa Catholic Conference said priests are talking about the issue in their parishes.

Twenty Republicans in the Iowa Senate are co-sponsoring a bill to impose the death penalty on those found guilty of kidnapping, raping and killing a child. It takes the support of 26 senators to pass a bill.