You are here: Home / Sports / Gary Dolphin will return to Iowa broadcasts 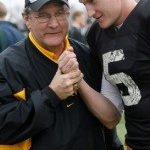 The reinstatement decision, like the suspension, was made by Learfield’s Hawkeye Sports Properties, following collaborative engagement with the Iowa Athletics Department. Dolphin has served as “Voice of the Hawkeyes” since 1996.

Dolphin was suspended on Friday through the remainder of the men’s basketball season for an inappropriate comment during the Feb. 19 broadcast of the Iowa men’s basketball game against Maryland.