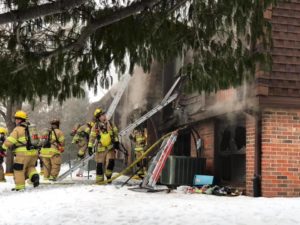 Fire swept through a crowded apartment building in Cedar Rapids this morning.

Firefighters were called to a 16-unit building at Hawthorne Hills Apartments about 8:30 and were told several residents were trapped on the second floor.

Fire and smoke were heavy and crews went in, carrying out one man with life-threatening injuries.

Three other adults were rushed to the hospital while three more people had lesser injuries.

One firefighter was also hurt. The building was heavily damaged.

The cause of the fire is still unknown.