Five members of the Iowa House have signed off on the idea of charging a new fee to the owners of electric vehicles and a new, per-kilowatt-hour tax at public charging stations. Michael Triplett, a lobbyist for the Automobile Manufacturers Association, asked legislators not to set the fee higher than what electric car owners are paying in neighboring states.

“This is the future,” Triplett said. “These are drivers currently who are little bit wiser in their use of their car and its sound to some of our members like they’re being punished for choosing the most economical, environmentally-friendly option.”

The Iowa DOT has recommended a $130 annual fee for electric vehicles. That’s higher than what’s being charged in Minnesota, Wisconsin, Missouri and Nebraska. Drivers of gas-powered vehicles pay the state fuel tax which finances the upkeep and construction of roads and bridges. Scott Newhard, a lobbyist for the Associated General Contractors of Iowa, said electric vehicles should pay into the Road Use Tax, too.

“One thing about electric vehicles — they do use the roadway,” Newhard said. “…Their presence on the roadway requires them to pay a user fee.” 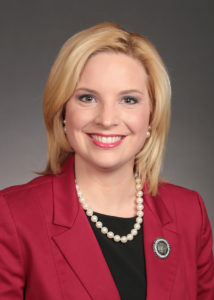 Representative Ashley Hinson, a Republican from Marion, said automobile makers are promising to produce more electric vehicles — displacing the gas-powered vehicles that are generating the tax revenue for roads now.

“We need to be making these decisions so the infrastructure is in place, so we’re ready for that,” Hinson said during a House subcommittee meeting on the issue.

By late last year there were 800 battery-powered vehicles registered in Iowa. There were about 1999 plug-in hybrids that can switch to gas power when the charge runs out.