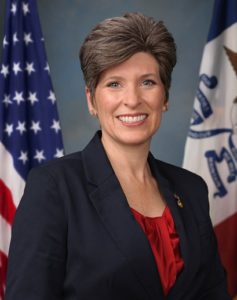 U.S. Senator Joni Ernst doesn’t put much faith in gun control legislation which passed the U.S. House on Wednesday ever seeing the light of day in the Senate. The bill would require background checks for virtually all sales of firearms nationwide.

Ernst, a Republican from Red Oak, questions the intent of the legislation, which was pushed through the Democratic-majority House.

“I don’t know that that one will be coming up,” Ernst says. “We should go back and, of course, scrutinize the text of the language and what we are trying to accomplish.”

Ernst served in the Iowa Army National Guard for 22 years and is the first female combat veteran elected to the U.S. Senate. Ernst remains skeptical of the first gun control legislation to pass the House in more than two decades.

“We certainly want to make sure that we are protecting our Second Amendment rights,” Ernst says. “I’ll be honest, it’s a House bill right now. I have not had the time to go back and read the text.”

Iowa Congressman Steve King, a Republican, voted against what he called “a resolution that seeks to place unconstitutional restrictions on the God-given, 2nd Amendment Right to Bear Arms enshrined for all Americans in our Constitution.” King urged President Trump to veto the bill, should it reach his desk.

Iowa Congresswoman Abby Finkenauer, a Democrat, voted for the Background Checks Act of 2019. In a statement, Finkenauer said: “It’s long past time Congress came together to pass a bipartisan bill addressing gun violence.”