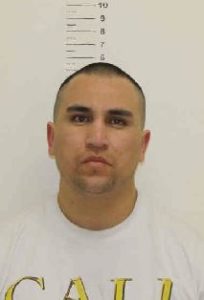 A man wanted on several warrants, including kidnapping and stalking charges, tried to escape from authorities last night in Le Mars.

At about 11 o’clock Thursday night, officers saw 31-year-old Jose Murillo drive into a Le Mars park. Several officers tried to arrest Murillo, but he drove away at a high rate of speed. He used a large pile of snow as a ramp, but after clearing that first hurdle, his Chevy Malibu failed to make it over a second pile of snow.

Murillo got out of the car — which was hung up on the snow bank — and ran, but was quickly surrounded by a group of officers, including a police dog, and arrested.