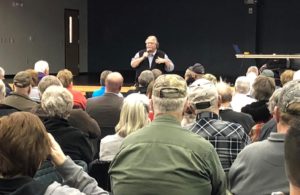 Concerns are being raised about the health impact of a byproduct from the steel-making process being used on gravel roads in eastern Iowa.

Muscatine County leaders have suspended the use of steel “slag” instead of the pricier crushed rock, but won’t ban it outright.

Nathan Mather, chair of the county board of supervisors, says he wants more data from the state and the local processor.

“There might, conceivably, be something that indicates the other way,” Mather says. “I’m not trying to be wishy-washy, I’m just trying to say, when you’re making decisions that affect this many people, you got to at least give people a chance to speak up.”

The state toxicologist analyzed the slag and concluded children living and playing nearby face risks of adverse health effects from the high manganese levels. The slag reportedly also contains high levels of cadmium and other heavy metals.

During a recent hearing, Mather said he’s convinced the slag may be trouble.

“I don’t see how we don’t ban it. That’s my opinion,” Mather says. “It’s gonna’ sound weird maybe to some people, because it sounds like, ‘Oh, he’s been so against it.’ No, I’m just trying to get the truth.”