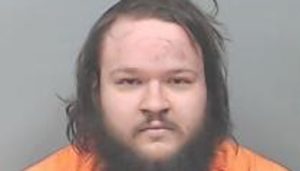 A 24-year-old man who lived in a Cedar Rapids apartment building is accused of setting it on fire last Thursday, causing the eventual death of another resident and injuries to six others.

A man who lived at Hawthorne Hill Apartment complex in Cedar Rapids died Saturday night. Sixty-five-year-old Steven Balvin was carried out of the burning building by fire fighters and soon transferred to the burn unit at University Hospitals in Iowa City.

Dallas Tullis, the man accused of setting the fire, was taken into custody at the scene last Thursday and taken to a hospital. Authorities say he assaulted a security guard and a police officer at the hospital. He was arrested as he was discharged from the hospital.

The list of initial charges against Tullis include first degree arson and assault as well as assault on a police officer and interference with official acts. The fire caused significant fire, heat, and smoke damage to the entire apartment complex, according to the Cedar Rapids Fire Department, and other residents have had to find housing elsewhere.