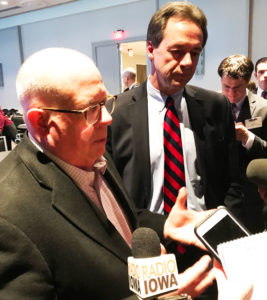 A Republican governor who has indicated he might challenge President Trump’s re-election is in Iowa today, attending an event organized by the National Governors Association. Maryland Governor Larry Hogan is touting what he describes as an “economic turn around” in his state — in contrast to what Hogan describes as dysfunction and divisiveness in Washington, D.C.

“I don’t know that I want to be president, but I do think that governors are much more prepared to be president than most other folks,” Hogan said to reporters. “I mean I think with all due respect to our friends in Washington, they spend a lot of time making speeches and arguing about things in committees, but governors actually govern and make decisions every day and run things.”

Hogan said he’s no where near making a decision about a run for the White House. As for who to responsible for the tone of national politics today, Hogan said there’s plenty of blame to go around.

“There’s divisiveness and angry rhetoric on both sides of the aisle, so I don’t want to point fingers at any one particular person or one party, it’s just pretty frustrating,” Hogan told reporters. “I think most people are just kind of fed up with all of it.”

Today’s event was convened by Montana Governor Steve Bullock, the chairman of the National Governors Association. Bullock is among the Democrats who’ve been mulling a run for president. Bullock said governors operate differently than what has become the norm in Washington.

“This can’t just be about speeches or tweets. We actually have to get things done,” Bullock told reporters. “We’re accountable to the people that we serve, so we actually have to figure out ways to make government work.”

Bullock indicated he’s not ready to discuss the likelihood he’ll run for president until after Montana’s legislature concludes its 2019 session.

“We’ve been able to do good things in Montana that, candidly, the rest of the country could learn from,” Bullock told reporters, “but for now, I think that’s as far as it goes.”

Iowa Governor Kim Reynolds welcomed her fellow governors to Des Moines during a noon-hour luncheon, telling them “Iowa nice” is a thing.

“We do refer to Iowa as the heartland of America, so we think everything begins here,” Reynolds said.

The Iowa Caucuses are the first event in the 2020 presidential election season, but Reynolds did not mention it during her remarks, which were focused on workforce development issues. Both Reynolds and the Iowa Republican Party’s chairman have indicated they support President Trump’s reelection, but will not prevent a challenger from competing in the Iowa Caucuses.