You are here: Home / News / Economic impact of casinos on the state increases 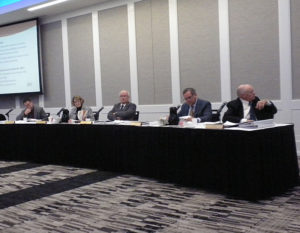 Racing and Gaming Commission members listen to a presentation.

The Iowa Racing and Gaming Commission renewed the licenses of the 19 state regulated casinos at their meeting Tuesday in Altoona.

Racing and Gaming administrator, Brian Ohorilko says it was pretty routine.”No issues this year as it relates to any of the license renewals,” Ohorilko says. He says the impact of the gaming industry on the state increased this year. “I think many times people look at just the tax revenue, but when you factor in payroll, salaries, other expenditures that maybe don’t meet the reportable requirement and commission rules — that overall economic impact on the state of Iowa is over one billion dollars,” Ohorilko says.

Ohorilko says the industry should be proud of the $1.36 billion impact on the state. “It is something that is startling and impressive and important to make note of,” Ohorilko says.

Iowa Gaming Association president, Wes Ehrecke spoke to the commission about the casino impact. He says they have fulfilled the mission set by the legislature when they approved gambling 30 years ago. “To be a catalyst for economic development, to generate tourism dollars and generate great jobs,” according the Ehrecke. “And you think now to today as you look at this –over one billion dollar annual economic impact for those wages, for that Buy Iowa First program that’s over 240 some million, as well as the charitable contributions — over 90 million — we have paid for a lot of visionary things.”

Ehrecke says the impact increased in several areas. “In the wages we were up about 10 million, in the Buy Iowa First related area, about $7.6 million, In the gaming tax, about $4.7 million and in then also charitable contributions about $400,000. So, we were up from the year before,” Ehrecke says.