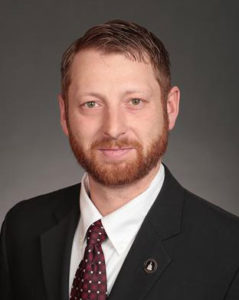 Lawmakers are considering a second attempt to penalize people who get an Iowa farm job in order to make undercover videos or harm the animals. Republican Representative Jarad Klein, a farmer from Keota, said the livestock industry is the “life blood” of Iowa’s economy and it must be protected from bad actors.

“People that are wanting to cause harm, wanting to lie, wanting to deceive,” Klein said during a House subcommittee meeting on the bill.

A federal judge recently ruled a similar Iowa law — passed seven years ago — was unconstitutional. Backers of this new bill say it matches part of an Idaho law that was recently upheld in federal court. Drew Mogler  of the Iowa Pork Producers Association said the proposal will safeguard livestock farms from people who intend to “physically or financially” cause harm.

“Recently Mercy for Animals was running advertisements in Iowa, seeking undercover investigators who are committed to Mercy for Animals objective, which is to eradicate the food animal system,” Mogler said, “and we believe they are willing to take any measure to destroy that system.”

Daniel Zeno of the American Civil Liberties Union of Iowa said while the bill appears to be narrower than the 2012 law, it likely would be challenged in court.

“Our goal is not to undermine the security, the protection of agricultural facilities. That is an important interest,” Zeno said, “…but we can’t do that by taking away free speech.”

Representative Bruce Bearinger of Oelwein, a Democrat, said the bill could help deter “bio-terrorists” who seek to spread disease in swine herds and poultry barns.

“Dishonest access to those properties is a huge risk,” Bearinger said, “and I believe that this bill helps prevent any undue problems that can occur from it.”

This new bill will be considered in the House Agriculture Committee tomorrow. It would let people be prosecuted for seeking a job working with Iowa livestock, in order to inflict financial damages.