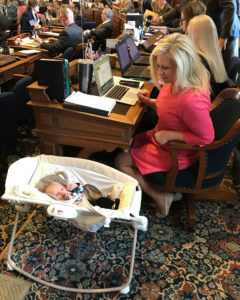 There’s a temporary spot on the floor of the Iowa House for a baby born on Valentine’s Day. A bassinet was set up this week as State Representative Megan Jones of Sioux Rapids returned to work at the capitol with her baby boy.

“Our daycare doesn’t take kids until they’re six weeks old and so we were kind of in a pickle when it comes to what to do with the baby,” Jones told Radio Iowa. “The other two are at home, with dad, and he comes with me.”

Jones had baby number two a year ago and her daughter Alma spent the first few weeks of her life on the House floor, too. Jones said House Speaker Linda Upmeyer told her “everyone knows the drill” because of last year’s experience.

“She said it was great to have a baby on the House floor and it really does help cool some tempers now and again,” Jones said. “It really does remind us why we’re here.” 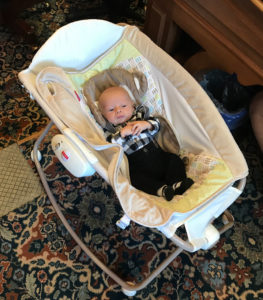 The baby’s name is Arthur Clyde Jones, named for a great-great uncle and a grandfather.

“Some of the lobbyists have taken to calling him A.C. as in A.C. Slater from the mid-90s show, ‘Save by the Bell,’ which is cute. We didn’t even think about that,” Jones said. “We call him Archie.”

Representative Jones is an attorney who was first elected to the Iowa House in 2012.