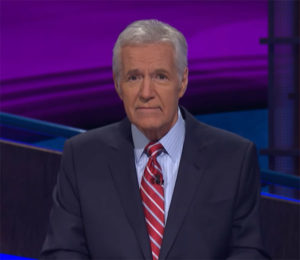 Many Iowans who love the TV quiz show “Jeopardy!” are reacting with shock after longtime host Alex Trebek made the following announcement on Wednesday.

“Just like 50,000 other people in the United States each year, this week I was diagnosed with stage 4 pancreatic cancer,” Trebek says. “Now normally, the prognosis for this is not very encouraging, but I’m going to fight this, and I’m going to keep working.” The 78-year-old Trebek has hosted the program since 1984.

Amy Jardon, chair of the Cedar Falls affiliate of the Pancreatic Cancer Action Network, says “Jeopardy!” and Trebek have been reliable staples for her — for many years. “I reacted as if I’d gotten punched in the gut,” Jardon says. “It’s devastating on a national level to hear somebody that’s been in your house since you were a child being diagnosed with pancreatic cancer. It’s not quite the connection as when my mom was diagnosed with it, but I was in shock.”

Jardon’s mother was diagnosed in 2012 and died 13 days later. Typically, 70% of those who are diagnosed die within a year. The five-year survival rate for pancreatic cancer is only nine-percent, but some people respond better to treatment. “Through my volunteer work, I have met a lot of people who are double-digit survivors and some of them have been stage 4 survivors who are here ten years later, 15 years later, it is amazing,” Jardon says.

The survival rate is slowly rising, thanks to better treatments and more awareness. One goal is to double the survival rate within the next few years, which advocates say is possible through more research, clinical initiatives, patient services and advocacy year-round. “It’s sometimes an awareness of people realizing there is a chance, there is hope,” Jardon says. “They don’t have to sit there and hear the doctor say they have six months and go home and write their will. That’s the doctor’s best guess but the doctors don’t know. We always say tomorrow is never a promise for any of us. As long as there’s still a chance, keep fighting.”

Statistics find about 580 Iowans will be diagnosed with pancreatic cancer this year and 430 of them will die from it. It’s the third-leading cause of cancer death in the United States and it’s expected to become the second-leading cause of cancer death by 2020. Symptoms can be vague, ranging from abdominal pain to back pain, changes in stool, yellowing skin, weight loss, appetite loss, and a feeling of being full after only eating a little food. Learn more at: www.pancan.org