You are here: Home / Outdoors / Thick ice and heavy snow could cause fish kills on Iowa lakes 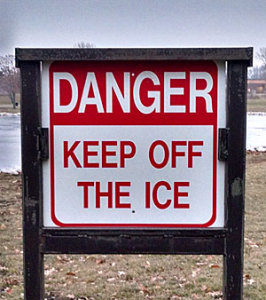 Warmer weather early in the winter raised concerns that ice on the state’s rivers and lakes would not be strong enough for ice fishing. That has turned around to where the DNR is concerned conditions could make it tough on the fish to survive in the water.

Fisheries Biologist, Mike Hawkins in Spirit Lake says oxygen levels in the water are a worry. “A couple conditions that really can hurt oxygen levels are that deep snow cover — and we’re sitting with about two feet of snow on top of the ice — and then the thick ice itself. Over 24 inches in some places for ice thicknesses,” Hawkins says.

He says the snow and thick ice prevent the oxygen from being replenished. He says there isn’t light penetrating into the water and that stops any photosynthesis that helps create oxygen, and the activity of the fish starts to deplete the oxygen. There is no way to pull that lid of snow and ice off the top of the lake. “At this point there isn’t much that we can do other than monitor and we’ll plan ahead for the coming season. We’re already starting to make some plans for some additional stocking for a couple of lakes that we already know are getting low and we are anticipating that we’ll have some winter kill,” according to Hawkins.

The DNR has aerators for some lakes. They don’t add oxygen, but can open up some of the water and give the fish some relief. Hawkins says the harsh conditions prevented them from using some of those aerators. He says they had some treacherous ice early on that prevented them from finding a safe time to turn them on. “And then we got to the first part of February and though winter is mostly over here…and then we get the cold pattern that we are in now that’s really starting to put the hurt on a few lakes,” Hawkins explains.

Hawkins says the oxygen situation is like a bank account, and each lake is different based on the size of their account. “When you are taking money out and not putting any in any deposit, eventually you are going to run out,” he says. “So, the deeper the lake is, the more volume you have, the safer you are from that situation. We are seeing some surprisingly high oxygen levels in a few lakes. And that’s probably attributed to a quite a bit of incoming water,” Hawkins says. “We were so wet that we still have a running water in a lot of our inlet streams to some areas. That’s probably providing some refuge and keeping oxygen levels high in some areas. But, the longer this drags on, the harder that is going to be to make it through.”

Hawkins says the DNR monitors oxygen levels at lake across the state and winterkill is from time to time part of the natural cycle. He says fish species in these lakes have evolved and their populations usually rebound very quickly in those situations.