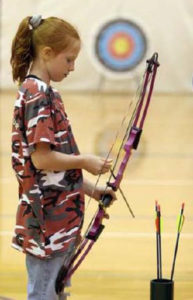 The boys’ state basketball tournament isn’t the only state tournament that will hold its championship rounds in Des Moines this weekend.

Some 1,900 Iowa students from grades four through 12 will compete in the Iowa State Archery Tournament. Donise Petersen, the archery coordinator for the Iowa Department of Natural Resources, says the sport is seeing healthy growth.”We have 300 schools that are actually shooting archery during the school day with physical education, most of those classes are going on,” Petersen says, “and then we have about 100 schools that are shooting actively within the competition program.”

The tournament features a full field of 88 teams shooting for nearly $17,000 in scholarships and other prizes, as well as a chance to go to the national competition this spring. Peterson says the local-level competitions got underway a few months ago. “Throughout the state of Iowa, schools started competing the first weekend in December all the way through the end of February,” Petersen says. “They have face-to-face archery tournaments and those schools that are the highest-scoring schools within their divisions — we have elementary, middle school and high school divisions — get to attend the state tournament.”

During this weekend’s state tournament, there’s a two-day bullseye competition in addition to a one-day 3-D competition using animal silhouettes.
“The targets range between ten and 15 meters,” Petersen says. “There are targets such as a turkey, a deer, a bear, an antelope, a ram and a coyote. They’ll shoot those targets and depending on where their arrow hits within the target is the score that they receive.”

Unlike many other sports, Petersen says archery levels the playing field, “allowing students of all sizes and abilities to participate and excel.” The state archery tournament will be held at the Iowa State Fairgrounds both Saturday and Sunday.